Opening of the exhibition 'Het Gebouw', which runs til October 7th.

Featuring my sound work 'Verstilde Tijd', based on recordings of the old bell that's on the building since 1771. The ghostly resonance of the bell (which is being restored as we speak) will be heard through the fireplace of one of the rooms of the beautiful old building.


From 7 September to 7 October 2012, MOA, in collaboration with Blue Episode Foundation and Galerie Jaap Sleper, is presenting Het Gebouw, an exhibition held in the Oud Amelisweerd country house. For MOA this is the prelude to the official opening of the museum scheduled for mid-2013. For Blue Episode Foundation, Het Gebouw is number six in its series of art projects held in empty buildings, buildings that are undergoing or in line for restoration, renovation or conversion. With Het Gebouw, Oud Amelisweerd finds itself in an intermediate phase: the restoration of the shell of the house has been completed and the restoration of the wallpapers and the museum adaptation is about to begin. For a very brief time, Oud Amelisweerd is the building with bare corridors and empty rooms.

A journey through the bare corridors and empty rooms of Oud Amelisweerd gives rise to reflection and contemplation and imparts an unavoidable sense of melancholy.

In addition to Armando, twelve other artists are represented in
Het Gebouw. They, too, are relating to the bare corridors and empty rooms of Oud Amelisweerd during this interval between the Alteration of the Old and the Not Quite New. They are relating to the hidden history and new identity of Oud Amelisweerd, and they join in giving shape to this identity. A number of works were created especially for this project. 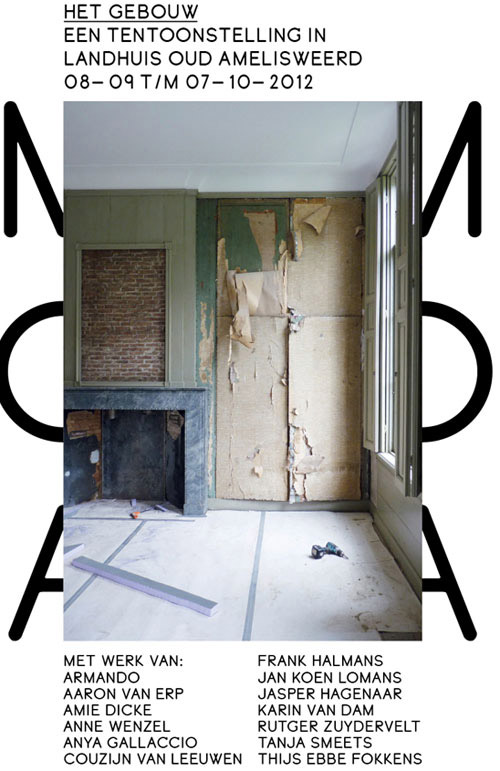