Side A. Patina I
Side B. Patina II

SOLD OUT
But available digitally here

Following on from their debut release, 'Glisten' released by Low Point in 2009, 'Patina' is the second collaborative album by Tim Catlin, a guitarist and sound artist based in Melbourne, Australia and Machinefabriek, the nom de plume of Rutger Zuydervelt from Rotterdam, the Netherlands.

For the creation of 'Patina', Catlin and Zuydervelt adhered to the tried and tested method of working successfully employed on their previous collaboration. Catlin made initial recordings drawing upon a wide range of approaches, preparations and techniques for guitar and electric sitar that were then sent to Zuydervelt for the addition of extra sounds, overdubs and sequencing.

With both artists' sharing a passion for developing upon the minutiae of the guitar, 'Patina' is an immersive album of unfurling layers of sound, acute harmonic gestures and deeply embedded drones. Throughout the course of these two long-form tracks, one can sense that the working relationship between these two artists has hit its stride. With a broader sound palette, including the introduction of field recordings and rhythmic elements being utilised to great effect, 'Patina' is an album of both gentle nuance and compelling intensity.

'Patina' comes via influential Nottingham label Low Point and features Australian sound artist Tim Catlin, along with the prolific Rotterdam based Rutger Zuydervelt, appearing here under his Machinefabriek monikerâ€¦
When embarking upon the recording process for Patina, Caitlin and Zuydervelt continued the method practiced on their previous work, Glisten, Catlin beginning with electric sitar and guitar, exploring an array of techniques and approaches in order to capture his wanted sound. This raw material was then forwarded to Zuydervelt, who added his own ideas, overdubs and sequencing along the way. The result of these efforts is two pieces around eighteen and fifteen minutes respectively, containing a number of subtle movements which bleed into each other and explore an expansive sonic territory.

Side A opens with gentle ambient loops which are stylistically quite similar to Machinefabriek in tone and are marred by glitches and static, with short bursts of noise throughout. As the minutes pass however, Catlin's influence makes itself known, at first almost imperceptibly but with increasing frequency, in particular when the chiming tones which presumably originate from treated electric sitar appear. The remainder of Side A is driven forward by harsher sounds, which hit apex towards the final minutes and drop into delicate chiming melodies to see out the piece.

Side B begins slowly and opens up over some minutes with long drones, the music here more challenging and abstract than on the previous side. As the music progresses with carefully sculpted noise, a beat of distinct timbre is improvised, lending a strong rhythm which punctuates the noise. The final moments of Patina are dominated by casual melodic wanderings which though feel almost an afterthought, are a fitting close to the album.

Patina is an intelligent and engrossing work which imparts a feeling of being composed with care, rather than the product of improvised jamming. Both sides of Patina are accessible and amongst the subtle ambience and experimental tones there is a wealth of melody and sound for the listener to get lost within. Fans of Catlin and Zuydervelt's past work as individuals or collaborators will enjoy Patina and it is another strong work for both artists' catalogue.

So many words associated with the process of patination have such negative connotations: the act is a tarnishing, a corrosion, a corruption. Yet in certain circumstances, the formation of a patina is  welcomed, sought after, even encouraged. Just down the road from where I sit right now, there are some new houses which have been there barely a couple of years, but their roofs are a bright green, copper having been used with the clear intention that it would oxidise this quickly.  Likewise, new timber structures are designed to change in appearance  prematurely, to silver, or to attract moss; as well as providing  additional layers of protection, or even insulation, there is an implied message that the buildings are working with, as opposed to usurping, nature. But more than anything it is the age, or the desire to set the young in the context of the aged that is prized. Indeed, inside those homes, brand new furniture will have been made from reclaimed, pre-patinised, or even, to use another word which doesn't sound like it should be a good thing, distressed materials.

And so it is with music too. The patina of vinyl crackle, and the repurposing of music's past, have been the calling cards of the hauntological genre, a canon of records which very much put the geist back into the zeitgeist. 'Patina', the second release from the pairing of the Netherlands' Rutger Zuyderfelt, aka Machinefabriek, and Tim Catlin from Australia, isn't necessarily one that always feels like it belongs in that spectral body of work, but there is that same deliberate temporal disconnect, the joins between the new and the old being visible, the patina being welcomed, encouraged and facilitated. From the materials that were provided to him by Catlin, Zuydervelt has produced something that is at once novel and ancient: a modern piece  which has that much sought-after sense of provenance.

You may have gathered that this is not one of Zuyderfelt's improvised collaborations, such as the particularly productive one with clarinetist Gareth Davis (which has just yielded some more fruit in the Grower CD), but rather something approached from the perspective of architect  or engineer. Catlin specified the materials, a collection of electric guitar and sitar recordings, which Zuyderfelt has patiently spliced  together, adding historical features, and then aging the end result.

Though it is released by Low Point on (pretty white) vinyl only, much of the crackle that you will hear is the product of the design, rather than of the reproduction. The first  side in fact begins with a looped section of hissing surface texture  noise, into which creeps the slowly evolving drones of the source material.

Catlin is a guitarist (much like his countryman Oren Ambarchi or, indeed, like Zuyderfelt himself) who is less interested with the  conventional applications of his instrument than with its sonic  possibilities. What the embellishments do is make you think of an  alternative history for the guitar, one in which the more experimental  urges of the pioneering likes of Les Paul were the ones that took root;  you find yourself imagining what might have happened if, for example,  Hendrix hadn't died before getting his hands on an e-bow. This desire to connect to (or rather, to show a disconnect from) music's  linear history asserts itself most strongly when a ghostly choir emerges from amidst the static, a classical music LP being mined for its  nostalgic mood much as Philip Jeck would do, before it is supplanted  once more by more contemporary-sounding ebbing and flowing tones.

The warm and natural sounding drones of the second side, in which the pulsations of Catlin's guitar take on the character of a field of  crickets on a balmy evening, are increasingly sand-blasted, the surface  becoming pock-marked, the underlying detail indistinct. After a section  of echoing, panning rhythm (the uncanniest of all dub revivals, in a  sense), it closes with a hazy fragment of improvisatory guitar, spinning and fading like the last dying notes of a mechanical music box, or like a distantly-remembered tune evaporating from memory. And that last  layer, the one that is formed in the mind of the listener, is perhaps  the most important patina of all. It is those positive connotations of  that word you'll be left with, of that sense of reinforcement, and of  just how powerful those juxtapositions of past and present can be. 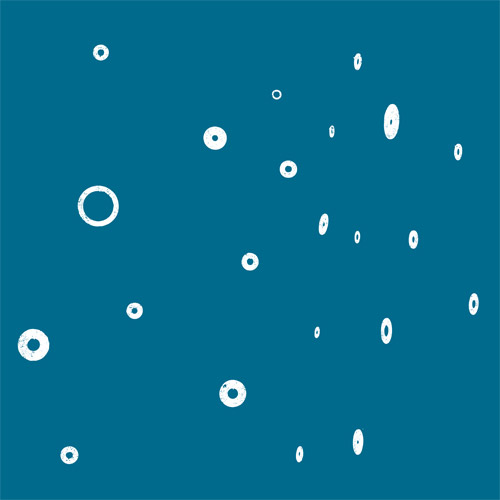