An album with short, playful and accessible vignettes, made with Italian classically trained guitarist Sergio Sorrentino. Within my discography, its style is closest to 'Glisten', the album I've made with Tim Catlin, yet 'Vignettes' has a lighter touch to it.

This is an album based on the beauty of the electric guitar sound. The pure sound of the electric guitar (mainly “clean” or sometimes get a little bit “dirty” with the fuzz pedal) evokes memories, images, emotions. The harmonics, simple chords, arpeggios, single sustained notes of Sergio Sorrentino’s guitar formed the starting point of the creation of each track. Sergio recorded ideas, sketches and improvisations, which were then further processed by Machinefabriek. Mainly using the sounds of Sergio’s guitar playing as building material, he constructed short pieces that emphasized the feel of the original recordings and fleshed these out to create a series of focussed Vignettes. This resulted a playful, melodic and highly accessible album that stands out in both artists oeuvres.

This album made it a bit more difficult for me to categorize or to place it somewhere on my website. It is not entirely improvised music, because it still constructed with prepared ideas. It generally sounds a bit like ambient guitar music mixed with what sounds like Rhodes piano but that's not what it really is. Oh, what was it made easy for reviewers when they first heard Ambient music: they knew exactly when they were hearing either keyboards or electronics or acoustic, electric or electroacoustic sounds or elements, but here, much more and more confusions are happening here than that.

I can hear how sound loops were cut into parts and reverbs were also used as sound elements. I also noticed how certain background drones were taken from certain reverbs and how plucks were again turned into resonances. The album, believe it or not, the introduction of it says, is entirely based upon the electric guitar sound. You know that the fuzz pedal can add distortion, or can change the shape of its sound. From this foundation also a close relation was found with the reconstructional symbiosis in relation with Machinefabriek’s contributions. And then yes, with these contributions also electric piano starts to sound like the electric guitar and the other way around. When certain parts are cut out, you also no longer hear the playing itself. There’s somewhere also some radio noise segment interfering. Certain slow vibes seems to become evolving drones....

I also like to pick out the track “Alba/Dageraad” that features reverb guitar-based picking patterns of picking notes that sound like dripping rain drops, an idea I liked very much.

The album, which immediately started with the radio noise at first started to confuse, but quickly becomes like a rich sound world, an investigating soundscape with just a minimum of elements.

Autodidactic Dutch graphic artist – turned sound artist Machinefabriek recently added to his prolofic 2013 output with this effort, a collaboration with Sergio Sorrentino, an Italian avante-garde guitarist considered to be one of the best modern Italian guitarists. From an early age he showed a precocious brilliance, performing in a tonne of places in his native country, and has gradually amassed a large amount of acclaim for his work, which, it should be said is more Oren Ambarchi than Sir Richard Bishop.

The album as a whole reminds me of the high point of Machinefabriek’s 2012 album Color Tones a 12 minute track called Mosaic, which culminates in a wonderfully relaxing and evocative guitar part. In a way, with Sorrentino’s able assistance, Machinefabriek has distilled the beauty of this moment into an entire album, backed up by a suitable sense of dread, reminiscient of Svarte Greiner’s release of this year, Black Tie.

If I were to describe Sorrentino’s guitar work in 2 words I would say: natural harmonics. I can totally understand why as well, as they possess a subtlety that a notew often can’t muster and it’s a tool I’ve used endlessly in my own exploration of bass guitar.

The album is one of those albums that flows as one piece, with an element at the end of each track ushering in the next. The electronic drone style sounds from Machinefabriek’s synth work extend notes beyond their expected length, giving a sort of disorienting effect which maximises the dynamics of the piece. The only real problem I can think of is that never really explodes, but to change that would ruin its subtlety.

Machinefabriek is enjoying another prolific period, having recently released collaborations with Banabila, Celer and the Kleefstra brothers, among others. We can imagine a TV show called “Everybody Loves Rutger”, in which a different experimental musician might drop by every week for a jam session. On Vignettes, the artist has a field day with Sergio Sorrentino’s electric guitar samples, processing individual notes to create entirely new pieces – as the title suggests, vignettes. The keen beauty of these extractions is that they make the guitar seem like other instruments: at times a piano, at times a synthesizer, at times a bass, at times a chime. Added to these explorations is a field of fuzz that occasionally includes short wave radio segments, lending the recording an unearthed vibe.

An odd word appears in the press release: accessible. This is not a word typically applied to either performer, yet it applies here. The melodic “Caduta Libera – Vrije Val” is the first indication that something new is unfolding. It’s not exactly pop, but one can hum it, which is a welcome surprise.  Not everything sounds like an open window, but nothing sounds like a closed door. The complete stops of “Buco Nero – Zwart Gat” are teasing and playful. The opening moments of “Echi Del Tempo – Echo’s van de Tijd” imitate the timbre of a music box. While listening, one becomes attuned to the expanded possibilities of the guitar, especially the potential of the notes when separated from the instrument. It would be interesting to hear the guitarist reinterpret the reinterpretations; in effect, to attempt to create cover versions of his own works, like sending a message through Google Translate and back again.  Would “Pendolare – Forens” retain its electronic timbre, or would the electric be reinstated? A drone may be easy for an electric guitar to imitate with pedals (see “Trasformazione – Transformatie”), but how to copy a clipped note? With any luck, this engaging new dialogue will continue to unfold on future collaborations.

The numbing and somewhat wistful hum on the introductive "Prefazione - Introductie" receives listeners into the emotional coziness of this collaborative project by Italian guitar-player Sergio Sorrentino, who has been regarded as "one of the most important new Italian contemporary guitarists", and the brilliant Dutch sound artist Rutger Zuydervelt, mostly known as Machinefabriek. After the preface, Sorrentino put classic guitar away and picked up the electric one, which becames the germinal musical element of the whole record by setting the tone of a kind of dialogue with the impressive editing skills by Rutger.

Notwithstanding the conciseness of chords, arpeggios and tones, the virginal guise and the lack of frills of each track which justifies the guessed title "Vignettes", this duo manages to grasp emotions, images and memories which sound like evoked by titles: the sudden sonic caesuras and the mysterious swallowing on "Buco Nero / Zwart Gat", which renders the quoted black hole, the contemplative arching of tonal drops on "Echi del Tempo / Echo's van de Tijd" (transl."Echoes of Time"), the elegantly squaled curves and the armour which protect cold bloods of reptiles, which got evoked by "Rettile / Slakkegang", some emotional acmes which seem to crack the relentless flow of time on the enchanting "Frammenti / Fragmenten", the trembling vibrations on the sweet melodic line of "Caduta Libera / Vrije Val" (meaning "free fall"), which are similar to those distortions of toy synths when they are almost completely out of power, the evoked metamorphosis by somewhat meiotic sonic efflorescences on "Trasformazione / Transformatie", the faint fade in on "Alba / Dageraad" (Dawn), the gentle sonic mister of lights and shades on the final "Nebbia Fitta / Dichte Mist" and so on. Any effect, any delay, any light distorsion by Machinefabriek on simple melodic weaves by Sorrentino sound so pertinent and measured that they could be imagined as inseparable aggrandizements of innate but hidden properties of electric guitar. 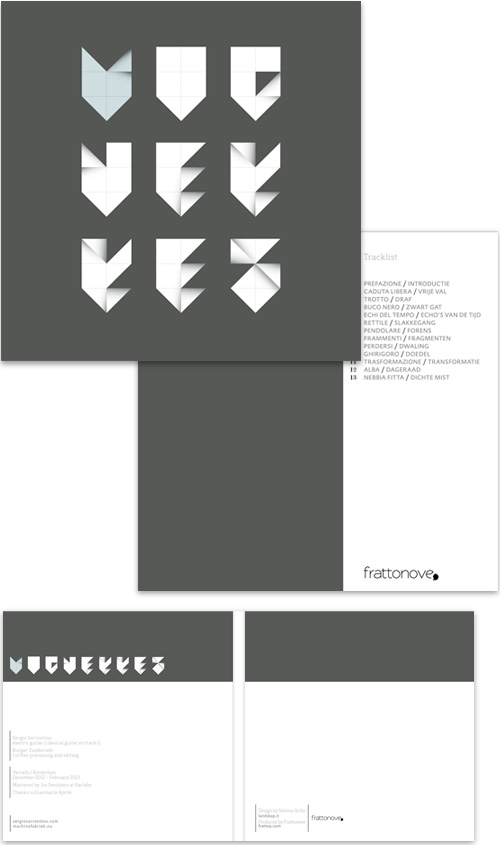