Rutger Zuydervelt never stops making music, even in his sleep he has a monitor set up at all times to record his brain responses and synthesize tones of feedback, distorted wails and manic beatplay. He has released a whole bunch of gloriously obscure 3" cdrs by himself and has just dropped an incredible full length on the Lampse label entitled 'Marijn', and his head is still overflowing with ideas. So it's hardly surprising then that we've managed to skim off the cream of the man's recording output for a special exclusive release. And not just any old release either, we asked him to put together a 7" and instead of opting for the old classic of one track per side, he instead coughed up eight one minute tracks; a selection of love songs for the Springtime. Odd? Definitely, this micro album holds within it more ideas than most artists manage to belch out over eight albums, let alone a handful of tracks!

'Er op Uit' starts things off with some gorgeous melodica tinkering before 'Dansen met groene groenten' gets us truly into the spirit of Machinefabriek. Taking cues from Delia Derbyshire (most notably the Radiophonic Workshop dances for children records) this is a crackly ode to all things good in the world. More evidence of this can be found by flipping the record over; the hand-clap led 'Blij Blij Blij' which could have been made to fit alongside any number of 1970s childrens tv shows. Eventually we reach the album's longest track (almost 2 minutes) 'Fietsen Langs de Dijk'; a slice of electronic music in it's most live form, a gorgeous floating synth melody played over looping toy drum machine sounds. It is electronica somehow, but is as punk rock as it gets. Machinefabriek puts the love back into electronic music, so let's put our hands together and show him some respect!

Starting to become something of a highpoint within the release schedule, Type pull yet another blinder with this addition to their suited+booted 7" series - roping in Machinefabriek from Lampse for a chunk of vinyl that looks and sounds good enough to eat. Already a familiar name for his indispensable set of 3" CDRs and corking debut LP 'Marijn', Rutger Zuydervelt (the man behind the Machine) seems incapable of writing a single bad note - with 'Lenteliedjes' taking the formulaic notion of a song a side, then blowing it wide open through eight one-minute pieces that revolve around a simple thematic constant; love songs in spring... Probably best viewed as a micro album that got lost and ended up on a 7", 'Lenteliedjes' displays a firm lineage to the viscous output of Delia Derbyshire and the Radiophonic Workshop recordings - with the melodica flecked opener 'Er Op Uit' a case in point. Seemingly distilled from sunshine, it's one of those songs that makes you feel inherently better - a trick Zuydervelt goes on to replicate through the edible 'Blij Blij Blij' and it's handclapping overture, or the floating synth and drum loops of 'Fiets en Langs de Dijk' (at two minutes, the longest track) wherein spectral melodies coalesce to form distinct and beguiling shapes that draw you in and refuse to relent. Machine music that looks well beyond the oft blinkered boundaries of the genre to coax a new sound from the wires... Scrumptious.

This new series of 7"s from the Type label looks to be pretty amazing. Even just based on the first two releases. A new single from Paavohaarju reviewed elsewhere on this list, and this here single from former AQ Record of the Week honoree Machinefabriek. The Machinefabriek cd was released on a label called Lampse, who we have decided is our perfect label. Every release is somehow in some way distressed, whether it's electronic, or lilting pop, everything is buried in hiss, or record crackle, the sound is murky or blurry, everything has that foggy distant sepia toned vibe that we can never get enough of, like Jeck or Basinski or Tim Hecker, Machinefabriek creates a mysterious sound world that hovers like a dear memory or a hard to recall dream.

This 7" is a strange one, as each side is split into 4 distinct fragments, each dark and dreamy in their own way, but also quite brief and way too fleeting. It's almost like a sonic slideshow, with just a few moments to glimpse each image, each sound. Side A starts off with some sort of wheezing harmonium, a music box like melody, with a haunting low end lullaby lurking beneath, the next movement begins with chiming bell like melody, lilting and dreamlike, under a glaze of static and crackle, all beneath a warm swirl of synth buzz and disembodied spoken word, part three is all strummed steel string guitar swathed in rumbling melodic grit, quite sweet and sad, and finally a sort of redux of the first track with a warm wash of forced air, a whirring mournful melody. The second side begins with a jaunty ice cream truck melody bathed in gentle chimes, all over a gently buzzing drone, part two is a swirl of shimmering guitars and chirping birds, the guitar sounding quite a bit like the intro to the Smiths' "How Soon Is Now" only stretched way out, while above drifts more buzzing steel strings and random found sounds. This slowly gives way to a murky soundscape with distant percussion, all crumbling and dark, drifty and dreamy but strangely ominous, and finally a mysterious little coda of chiming acoustic guitar, simple percussive thud and barely there glitch. So nice. 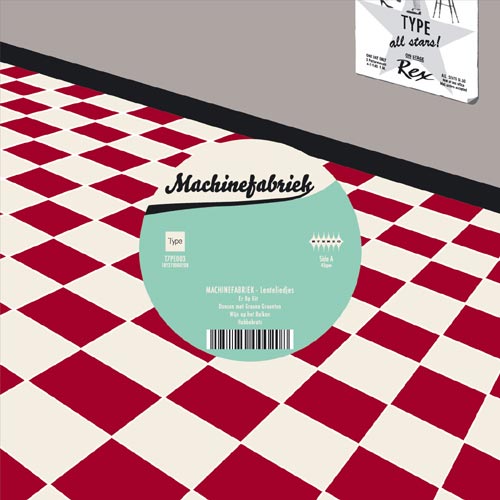