The album is a live recording of a tape-loop orchestra led by Berlin-based artist Preslav Literary School and features contributions from Machinefabriek, Posset, Poldr and many others.

Recalling the sounds of Faust, Popol Vuh, Throbbing Gristle, The Skaters and Broadcast the album draws on the energy of other decades and scenes as diverse as US underground noise, German krautrock and French musique concrète. At times melodic and blissful, at others dark and cut-up, the album seems to move beyond its constituent parts and methodology to reach something haunting and engaging. The album was mixed and mastered as it was played live, with no extra overdubs, by the cult Berlin dubstep producer Lord Cry Cry (Blunt Force Trauma).

NORMAN RECORDS
This is an interesting one. I'm not sure if we've stocked a record by a school before? Aside from St Winifreds School Choir of course. Ah them were the days. Roll forward 30 years to the Preslav Literary School in Berlin who have created an album of live recordings of a tape-loop orchestra which features contributions from Posset, Machinefabriek, Poldr and other people who took part. The packaging is cool.... it's an LP packaged as a cassette with a screen printed plastic sleeve, you get an essay inside to further your knowledge of the whole project and there's a bonus download of the album plus an entire set by Machinefabriek. Yikes! The music is pretty cool though. The idea was to get a bunch of folks to make tape loops from cassettes and then the school folks played them live and manipulated in front of an audience comprising entirely of people. It's pretty insane stuff though. I've no idea what on earth it sounds like but it's been on for 20 minutes and the variety of sounds and noises on offer are nothing but interesting. One of the craziest things I've heard in ages and yet it's completely compelling. Champion! 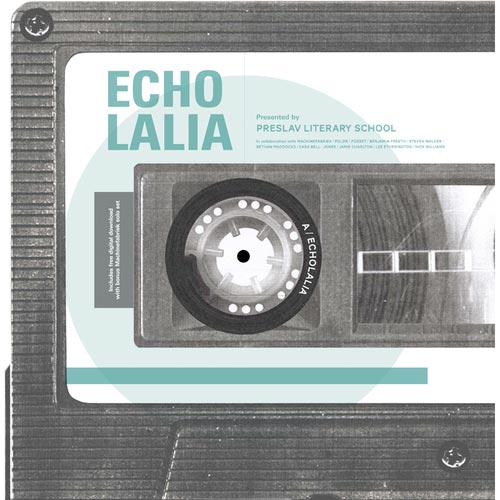