Shivers is the trio of Rutger Zuydervelt (Machinefabriek), Gareth Davis and Leo Fabriek, who join forces to conjure up a surreal album of parasitic intimacy and intensity. Though the three have played and recorded together in various combinations, this Miasmah release marks their first output as Shivers and manages to pull out quite a few surprises.

Named after David Cronenberg's first film, Shivers the album readily adopts this concept of body horror, the fear of bodily transformation and infection--a theory and technique that Cronenberg brilliantly captures with his first film and many thereafter. An aural invader immediately travels through your ears into your body, to infiltrate your soul with gorey supernatural sci-fi.

Crawling through the thick sludge of Ash and into the chaotic Otomo, you’re treated with what sounds like a beyond-the-grave collaboration of Albert Ayler with Alva Noto producing the soundtrack to Transformers. From entering Rabid, a chorus of intense destructive voices blindfolded leads you to an abandoned spot amidst a buzz of florescent lights. Here you're abducted into a new life hundreds of years in the future, moving you through stumbling jazz, John Carpenter styled themes, repeating organ-beats, and Moroccan doom. The psychological and physical combine to make Shivers a collective understanding of the grotesque, fascinating, and personal. You might not be the same.

avid Cronenberg has been inspiring the world for the past forty years, so it's not surprising to see a tribute to his work come about at this stage in his career. Interestingly, this tribute comes not in the form of film, but rather as a jazz/noise hybrid. Combining the talents of Rutger Zuydervelt, Gareth Davis, and Leo Fabriek, Shivers offers up a different interpretation of Cronenberg's work. Using elements of jazz, noise, and electronica, this European trio builds an intriguing sonic atmosphere  that not only represents Dave "Deprave" and his oeuvre quite well, but does so in an unexpected manner.

Whistling oscillations bring us to tight, strongly punctuated drum beats in the opener, "Ash." Futuristic, back alley decay surrounds sparse, but effective jazz noodlings. Feeling more Blade Runner than Cronenberg, this bleak, industrial soundtrack thickens with increasingly rough layers while offering a dystopic and grim view of Cronenberg's vision. Throbbing synths are the pool in which the free jazz clarinet and drums play in "Otomo." Giving way to high pitched feedback and looped, insect like buzz, this track soon exposes clacking street sounds which add an element of gritty realism. Harsh, distorted synths (?) do their best to obfuscate the drums, but there's no hiding the clarinet. "Rabid" starts harsh, but out of this womb comes the softest, most luxurious part of the album. Like the butterfly emerging from the cocoon, light, effective drums, keys, and horn deliver a beautiful, cheerful, rainy day melody. This softness can only be kept up for so long before the brooding (!), fuzzy drone of "Brood" takes hold. The synthy, electronic track that appears out of this stands in sharp contrast to the cacophonous physical instrument music from the previous three songs. The hypnotic looping of "Spacek" keeps taking us further from the jazz realm, but  while echoing the drums that it's trying to escape."Replicant" closes the album out by bridging both worlds together with subtle harshness, bassy electric drums, and the return of the horn. The static shroud that surrounds this song hits critical mass before lifting and revealing a dark, jazzy, piece that would be very at home in an 80's sci-fi film. Not to sell it short, though, because it's contemplative and the restraint adds a lot to its impact.

Shivers introduced three new artists to me. There's a glut nostalgic tributes and odes to horror icons these days, so I'm always wary when a new one pops up. Thankfully, Cronenberg was just inspiration and not an excuse to collaborate. These tracks stand out on their own and work with or without the association to Cronenberg. The mix of physical jazz against the stark electronics works very well (musically and in tribute to Dave's body horror), and if Shivers releases anything further, I will gladly check it out.

Born as a tribute of sorts to John Carpenter’s 1975 parasite-horror classic Shivers, here we have a relative super-group of sorts featuring three disparate heavyweights from the experimental scene: Rutger Zuydervelt (Machinefabriek), Gareth Davis and Leo Fabriek. At their core, the six densely claustrophobic songs of the project’s self-titled debut continue the strain of thoughtfully textured, maniacal but focused aural sketches that pummel any existing notions of post-jazz or any other quasi-genre into rubble, effectively raising the bar for everyone else rooting similar soil. “Replicant,” the album’s closing track, is the perfect example of Shivers’ rewarding din, effortlessly jutting from each movement (some towering and transcendental, some collapsing and obliterating) in a seamless storm of noise, dissonance, solitude, and harmony. All three players involved are by no means strangers to collaborative efforts, allowing each signature motif to bubble up through the murk without stealing the show or taking focus away from the whole.

Shivers – a trio of players using just clarinet, drums and “logic” – have produced a splendid self-titled album of improvised droning noisiness which is palpably alive with threatening, dark energy. When it’s not doing that, it produces a monstrous groan-drone effect not unlike some sleeping ogre who is going to chomp you in two with his big tusks when he wakes up. I for one enjoy the ruthless distortion of the sound, which produces a very attractive abrasive surface for the music, while at the same time running roughshod over the “traditions” of recording improvised music with accuracy and precision in mind. The performances are not half bad, neither. That’s Gareth Davis on the bass clarinet, and Leo Fabriek on the drums. Davis has played quite a lot with Machinefabriek and is also a member of A-Sun Amissa, Birdt, Maze, Mere, and The Whalers Collective, and Leo Fabriek has also drummed with Rutger Zuydervelt’s fine Dutch combo. That’s Rutger Zuydervelt supplying the “logic”, which could refer to computer programming, but his interventions are strong and powerful for Shivers, and he’s not just providing some polite background murmur with black boxes. Rather his role is strongly transformative, making their music into an exciting take on the “electro-acoustic improv” trope. I would say his actions are most successful on ‘Ash’, ‘Otomo’, and parts of ‘Rabid’, where he’s adding joyous abstract black sheets of filth, but on ‘Spacek’, where the trio opt to play a sort of movie-soundtrack suspense cue complete with a taut syncopated rhythm as the victim ambles innocently up a dark alley, it’s Zuydervelt who treats the whole track to give it an attractive muzzed-out patina so that the music can masquerade as some piece of dub-ambient-techno. As to the cinematic vibe, the band are explicitly paying homage to the movies of David Cronenberg, in particular his early “body horror” films with their nasty (though unique) ideas about the transformation of human flesh. From April 2014.

Supergroup alert! Shivers is the latest collaboration from Machinefabriek (Rutger Zuydervelt), Leo Fabriek and Gareth Davis (also on Erik K. Skodvin’s new album). The album is a tribute to the film of the same name by David Cronenberg, an investigation of the melodramatic and the macabre. Even today, the trailer (seen below) evokes chills, at the same time betraying a sick sort of humor, as evidenced by the final line.

Shivers skips the humor and goes right to the seeping, mounting dread. The album is all about atmosphere: claustrophobic, threatening, sinister. The wormlike creatures of the film invaded the body; this music seeks to create earworms. While it’s unlikely that anyone will be humming these songs soon, those who listen may experience a humming paranoia. This is lights-out music, music for creaking closets and open windows that we were sure we had shut.

'Ash' sets the scene with synthesized sounds that crawl and lurk, drums that attack and retreat and a clarinet that strikes like a snake. 'Otomo' leaps from the closet, knife in hand. We like to play with our food, but sometimes we get hungry fast. The gurgling, snacking sounds may be from the film; if not, they’re darn close. And the children? They really shouldn’t be so close to the … oh, never mind, just clean up the mess.

The thick synthesized growl of 'Rapid' is a perfect reflection of its title. When the sound jumps from speaker to speaker, it sets up a surprisingly rhythmic section; but it’s clear the danger is still present. This is a musical respite, like a tiny romantic scene in a horror film. But we all know what happens when people have sex in horror films. Fast forward if you like, or wait it out – it won’t be long. By “Brood”, the Carpenter synths have returned. Too much has already happened; there won’t be a happy ending. The movie ends with a virus being unleashed on the world (don’t blame me for the spoiler; you’ve had 39 years to see it), and the album ends in a similarly dour fashion as the music is engulfed by feedback. The recording ends in nearly half a minute of silence. Hold onto hope if you will, but no rescue is coming.

Dark ambient, jazz, noise, and a strong sense of uncontrollable fear come together on this new, self-titled Shivers album. The trio features the musical input of Rutger Zuydervelt, Gareth Davis and Leo Fabriek. They’ve collaborated before, but this is the first time they’re doing so under this particular name. The final result, a.k.a. this album, is challenging, but surprisingly brief in its length. It would seem these guys wanna get straight to the heart of what these noisy, drone-jazz fusions are all about. 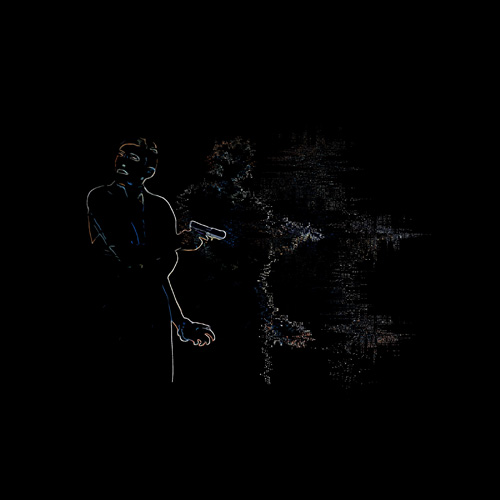