CDR SOLD OUT
But still avaialable as download, right here

A collage of experiments with an analogue pulse generator, two tone generators, three korg monotrons, a buddha machine, a reverb pedal, a freeze pedal and a small mixer.

Tulips, wooden cloaks, Harry Merry, XTC and cheese are not the only export products coming from the Netherlands. Also the music by  ‘Machinefabriek’ is one that travels outside the borders of this little spot on the world map. One of the recent dealers producing such a ‘Machinefabriek’ product that wants to be shipped or moved by postal pigeon; is a small label from a Dutch city of Nijmegen called Norwegianism Records. The release is called ‘kluwen’ and is available on CD packed in a fancy cardboard digi-pack. Yes, it’s perfectly normal if your tongue starts to hang out and your mouth starts to fill up with saliva… But for others who need more convincing words and want to know a little bit more of how this CD sounds, you are freely invited to read along the following mix of words:

Little tickling ticks that rattle with the occasional break of a sound that reminds me of opening a canned drink. In the deep background there is something happening; a little sound that seems to slumber until the tickling goes out of the way and it’s time to make itself heard. It rolls in and out like some kind of robot that turns it’s head to one side and back again. While this is the sound forward, in the background there are tiny interesting by effects waiting for your attention. You have to focus and pin point them down with all your attention and they might step in the spotlight for you to admirer.

Another soft crackle that makes me think of a needle meeting a dusty vinyl and greets it by skipping around says ‘hello’. A little momentum happens when it gives way for a microscopic little melody that than hides again for more abstract soft background electronic noises. It feels highly analog and almost as if the machines that produce these crispers of sound are doing their own thing without the overall conception of a humans watch. But this might be just an illusion as these swiftly changing sounds are obviously carefully directed, guided and administered in small but perfect doses. There is no moment of boredom as with all the exclusive appearances of more and more bizarre electricity expressions are interesting to say the least.

An perfect moment to describe is this strange sounding alienating structure that pops out of what sounds like a soft set of footsteps. It makes strange squeaks of probably an emotional joy or happiness as it rolls and tweets like a robotic bird with parrot like features. When this moment fades away it teams up with a melody of mystery and technology.
The technique used is like listening to someone controlling big authentic control knobs attached to a circuit bend satellite.

The story of how it has dropped out of the sky in the hands of this Dutch producer might be captured on one of its memory circuits; as one moment we might be able to hear a reconstruction of its fall through the ozone layer and probably also through the sound barrier. It is a little moment of time so it is advised to keep your mind focused.

More crackles, soft ticks and small town electronic movements start to gallop in this weird clicking cyberspace. The parrot like android and robotic chicken wings can be heard ending in the slaughterhouse of the sound art hypnotist where Machinefabriek slices them nicely with neat machinery. This is the end of my personal experience of ‘kluwen’, might it be enough to convince you to import this export product in your collection of extra ordinary rattles, ticks, and other abstract sounds! 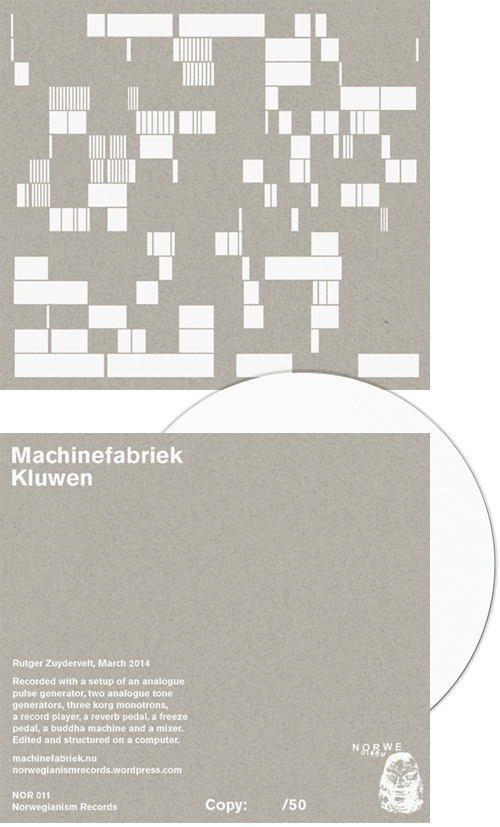