SOLD OUT
But available on the Veldwerk compilation

It can thus convincingly be argued, that the most recent machinefabriek-pieces are, in fact, even more ambitious and even less commercial (if that words makes any sense here at all) than his earliest material. Delectably presented 7inch â€žSlovensko" was even built entirely from field recordings collected while on vacation. Akin to the work of late genre-master Luc Ferrari, these two side-spanning tracks can be understood as â€žmusique anecdotique" - as collages assembled from a variety of different takes, which nonetheless constitute a new, seamless reality in the listener's mind. At all times, the contrast between near-chaotic semblances and mindbogglingly proficient sonic artifacts is at the heart of this music: On the A-side, a near-chaotic multimorph of anything from peaceful beach scenes, heavily reverbed hammering and dark-ambient-strings flows into a sequence of pitched noises culled from painfully tightening metallic wires.
The flipside is more dramatic, nervously jumping between starkly contrasting moods, before culminating in a finale of cloudy drones. The complete opposite of aural photography, this is very much music in the radio-play-tradition, with the audience being invited to make up their own plot. Even though nothing here is fundamentally revolutionary per se, â€žSlovensko" is rendered unique by the way in which pure field recordings and pitched material overlap and intersect. The world is sound â€“ it may seem like a cliche on paper, but it never does on this delicious little treasure of a record.

VITAL WEEKLY
Despite a plethora of releases, Rutger Zuydervelt never ceases to surprise. Not always I must admit, as there is a distinct style of his own, but sometimes he does something out of the ordinary. 'Slovensko' is such a thing. In September 2009 he went on holiday to Slovakia, armed with his camera (he is a designer after all) and these days also with a digital recorder. He collected a bunch of field recordings which he, back home, edited into the two parts of 'Slovensko'. No guitars this time here, but pure field recordings, edited, cut, mixed together into two lovely collages of sound. Motor sounds, dogs, voices, fences and metal gates and some more obscured sounds are put together in quite a cinematic manner. Not just a continuing ambient sound but a wonderful play of various sounds. This may very well be the first time that Zuydervelt worked so solely with field recordings. And with some fine result.

BOOMKAT
The shortest, yet arguably the most interesting of this week's Machinefabriek three-inchers is based upon field recordings gathered on an excursion to Slovenia. The sounds harvested from this trip were then heavily treated and assembled in an impressively musical fashion for this release. Think of this as auditory photography: Slovensko documents the soundscape of various locations and happenings withn them, treating the outcome to draw out the sonic depth. You'll hear the usual instances of wildlife and people coming and going, but arguably the less populated moments yield the most noteworthy results. When you hear strands of feedback sculpted from what sounds like creaking gates ('Slovensko 5') or massively amplified vibrations creating a potent scrapyard drone ('Slovensko 2') you feel Zuydervelt might be going about some of his most effective and experimental work to date.

EARLABS
After quite some time yesterday I finally had the pleasure again of seeing Machinefabriek (Rutger Zuydervelt) live again. Live his music always seems to be based on his guitar and small objects he rubs and beats upon his guitar. A whole other story is the 7" release Slovensko that he recorded for Eat, Sleep, Repeat which is based around field recordings taken during a trip through Slovakia in September 2009. Completely unlike his recordings from Israel which got released as Tapes of the day here he searched for unusual sounds, opposed to street recordings.
Not only the source material is different, but also the way they are presented. With the recordings Rutger Zuydervelt; where on tapes of the day the sounds are presented as they are here things get cut up, mixed, processed and god knows what more Zuydervelt did to them. With this he tried to highlight the more peculiar sounds, which, I think, he succeeded well at.
While the music contains this natural feeling, things also sound really abstract and rough. At one moment you can be hearing some birds twitter, while at others a gigantic loud noise is shredding your ears.
Because of the computer magic used on the sounds things get much more interesting than with the clean recordings you got to hear on Tapes of the day. And because only the field recordings were used the outcome is also very different from Zuydervelts other work. For this one you don't have to expect drone soundscapes or post-rock influenced ambient pieces. With this you can easily say we hear yet another side of the Machinefabriek, one we didn't hear before.
Slovensko isn't really a release for the people who are into the more popular side of Zuydervelts music, but those who are willing to take a step deeper into the experimental side of electronic music can easily take this one as a good starting point.
Hopefully Zuydervelt will go more in the direction of this kind of music. It's a whole new world to explore.

LOSING TODAY
A few weeks ago we received a mysterious red and white calling card - upon it our address and contact details on one side and over on the flip an email address simply stated as www.depteh.com - I must admit to being all at once concerned, puzzled and curious. We typed in said address only to receive an error message. That's strange we thought. A further clue was revealed by way of an email contact. Again only this time with a growing sense of concern, puzzlement and curiosity we despatched an enquiring email. And waited. A reply was eagerly received had we signed up inadvertently to some anti-establishment forum the kind usually tempered and propagated by the likes of Messrs Drummond and Orridge. Instead we were directed to a further web site. The puzzle was unfolding and the chase continued merrily. www.eatsleeprepeat.com/disinformation.html was the name of the linking web page, with graphics looking not unlike those utilised by those nice people over at both Expanding and Trensmat - Eat, Sleep, Repeat is a new label promising - well we'll let them take that up in their own words - 'Welcome to eatsleeprepeat.com, a new label created simply to serve the uncompromising expressions of alternative, drone, electronic, experimental jazz, krautrock, minimalist and post-rock movements. The site is a little bare at the moment while we sort out some things but plenty more disinformation will be added in the near future.'
The label promises future outings from Expo '70, Black to Comm and Eric Chenaux - first up though for their debuting release A limited 7 inch from Dutch aural alchemist MachineFabriek or as he's better known to the underground cognoscenti Rutger Zuydervelt. Clocking in at around 14 minutes in total this tastily tailored seven inch features two glimpses into Machinefabriek's intricate sound craft. The base framework for 'Slovensko' (Parts 1 and 2) was inspired by field recordings collected on a digital recorder during a visit to Slovakia in September 2009. By way of some applied sonic manipulation via a laptop and some carefully cultured editing, cutting and pasting of the gathered sound files, Machinefabriek concocts a curiously sparsely soothing albeit desolate melodic landscape, a glitch drone collage blending and freewheeling between moments of earthiness and elements of tensely coiled foreboding, though as some wit once said the devil is in the detail, the detail here being the subterranean undercurrents continually ebbing and flowing, evolving, mutating to turn and twist and shape shift with a fluid fascination - references to 70 Gwen Party would not appear out of place though it's the more spectral speaker spooking periods of unsettling disquiet found of the work of Muslim Gauze that may well strike a relevant chord. File under epically minimalist. Flip over for 'Cast 2' - a little more forthright in design than its predecessor and in some ways structured seemingly to reflect a reverse mirror image in so far as the impacting sun burst scalding noise quotient arrives face on from the start and then dissipates to a calming lull though happily that finds itself tempered by a degree of decidedly unhinged to be viewed with lights on from behind the sofa glassy globes of spine tingling eeriness. Goes without saying that you need this instantly in your life. 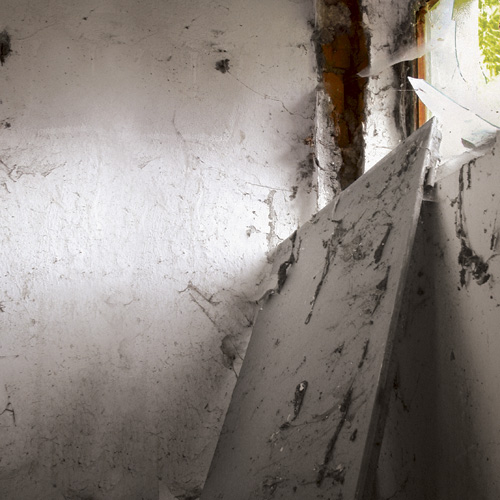