For 'Sneeuwstorm', I provided saxofinists Colin Webster and Otto Kokke (of Dead Neanderthals-fame) a rough track to improvise on. Their recordings were then again re-edited, processed, looped and (with added electronics) layered to create a dense and dynamic composition. It's only 31 minutes long, but it's quite a journey.

The first eight or nine minutes of this fine release also dwell in dronish territory. Zuydervelt (also known as Machinefabriek elsewhere) lists two saxophones among his arsenal which otherwise includes electric guitar, field recordings and other objects of an electronic nature and they're crucial to the success of this venture, imparting a warmth and, dare I say, humanity to the steady stream of (fantastic) detritus. Some low, crumbly sounds begin the piece and soon the reeds enter--long, soft, darkly timbred notes, throbbing somewhat. That first section is essentially a crescendo, multiple elements stirred into the mix, grimy and oily but with those saxophones providing hints of something beyond with some high, oboe-like, plaintive tones--it's a great, massively unfurling prelude. Just when you think it's going to carry on like this for the duration, it staggers, the horns popping and fluttering in space, the floor having dropped from beneath them. A great, disorienting change. The music grinds on, splaying out into a huge variety of buzzes, hums, rattles and who knows what else, those horns (I think? hard to tell sometimes) placating the horde a bit, drawing things gradually down for a while before welling upward once again in a static-strewn beehive of sound. Gentle horns over a deep, organ-like bed and ending with a lone sax wending its way through a marshy field of static or, I suppose, a snowstorm, lost. Excellent recording through and through, check it out.

Zuydervelt uses for is new piece two recordings of saxophones; the soprano is played by Otto Kokke (of Dead Neanderthalers fame) and the tenor by Colin Webster. To that Zuydervelt adds an electric guitar, e-bow, effects pedals, contact mics, coil pick-ups, samples, field recordings, tapes, a cassette-corder (as it spelled on the cover) and a computer. Not unlike last week's release 'Loos', Zuydervelt works here in a more collage like style, with the processed sounds of the saxophones going all sustaining, and building them upwards and onwards. Every now and then things go up, into a mighty crescendo and then drop out again. His own addition to the mix is an interesting range of mechanical sounds from battery operated hand fans, magnetic resonances picked up and the crackling of objects on top of contact microphones. Not unlike the work of label boss (here at least) Jason Lescalleet, Francisco Meirino (although perhaps less noisy) but also that of Illusion Of Safety, except in the work of Zuydervelt the saxophone in it's untreated form also plays an important role. This is a work of electro-acoustic music, more than much of earlier work as Machinefabriek; this also shows that one can move on from doing atmospheric drone music and go on into a much more diverse field of interest. All of this recent work is quite strong.

Colin Webster appears here, alongside fellow saxophonist Otto Kokke, their improvisations mulched into a soundscape by Dutch electronic composer Rutger Zuydervelt, who usually trades under the moniker Machinefabriek. Sneeuwstorm was assembled via a generative process. Zuydervelt asked Webster and Kokke to improvise over an electronic framework, and then their improvisations were cut up, folded in, looped and moulded around the sounds of Zuydervelt’s electric guitar and other miscellaneous field recordings – layers of recorded history that are reflected in Zuydervelt’s tiered, poly-temporal structure.

Yeezus Walk With Me

This is the latest major work from the prolific Dutch noise artist who more often goes by the name Machinefabriek. This kind of gallery-appropriate sound art has an extremely large dynamic range, getting so quiet that the last few minutes of this single-track record can only really be heard at max volume. Zuydervelt took recordings of saxophones (Colin Webster and Otto Kokke improvising over a score Zuydervelt composed for them) and turned them into a short (31-min) droning masterwork, filled with tiny pops and hisses, field recordings, loops and screams off in the distance. While extremely densely layered, it feels less like a blizzard (or “sneeuwstorm” in Dutch), than the feeling of impending doom over an imminent polar vortex.

Can a saxophone sound like snow (sneeuw)? In the hands of Rutger Zuydervelt (Machinefabriek), the answer is yes. On this album, Otto Kokke (soprano saxophone) and Colin Webster (tenor saxophone) find their contributions rumpled, looped, and otherwise manipulated in the service of a higher cause. Guitar and field recordings add even greater texture.  As a result, the album works on two levels: as a sonic echo of an imagined storm, and as an engaging art piece.

Knowing the inspiration behind the recording, one is prepped to listen for weather-based reflections. The quiet beginning and end are givens: the origin and denouement of the storm. In the early minutes, light field recordings of wind and static snow set the stage for the saxophone’s first drone-like notes. These notes bear a light sense of foreboding. The storm isn’t bad yet, but conditions may worsen. And worsen they do, with sleet and then squall (7:25), sending hats flying and chapping the skin. This initial build, which collapses at 8:19, provides an extraordinary lesson in restraint, bearing both the sound of the storm and its emotion. After this, all bets are off; notes fly like frightened birds while fragments of melody fall to the earth like broken tree limbs.

Halfway through, one realizes that the timbres have turned from reflective to metaphorical. This is a wise move on Zuydervelt’s part, as it helps the recording to transcend its subject. Sure, one might interpret the buzzes of the 13th minute as chainsaws clearing the fallen branches, but one might also hear them as live wires or factory engineers. Likewise the saxophones coming out to play in the 15th; they may be interpreted as citizens venturing outside after the storm, or clouds gathering for a final surge. The recording serves as a tabula rasa, allowing the listener to make their own associations.

Given its sources, the most remarkable aspect of Sneeuwstorm is the range of its dynamic contrast. The piece is 31 minutes long, yet no two minutes are the same. As such, the composition not only operates as a reflection of nature, it is a force of nature, one of Zuydervelt’s best long works to date.  Kudos to all involved.

Sneeuwstorm” (“Snowstorm”, in English) is a half-hour epic of a release, appearing under Dutch musician Rutger Zuydervelt’s own name rather than his better-known Machinefabriek moniker. As I understand it, Zuydervelt sent some sketches to saxophonists Otto Kokke and Colin Webster, who recorded improvisations responding to the material. All of these fragments were then edited together into a finished piece, with additional samples and electric guitar added by Zuydervelt.

The basic macro-level structure of “Sneeuwstorm” is quite simple: start off really quiet, gradually build into a howling blizzard of cacophony, then drop suddenly to near-silence again; repeat. This process unfolds several times throughout the piece, and yet each time it happens, the timbral and textural details are substantially different. Sometimes the unprocessed voices of the saxophones are clearly distinguished from Zuydervelt’s subtle electronics and electric guitar, but at other points there is ambiguity as to the source of the sounds heard: precise, intricate details are revealed, only to be swept up in a disorienting flurry of tones. “Sneeuwstorm” thus plays with what might be called visibility, with the wide territory lying between the poles clear/unclear and distinct/indistinct. It is in this sense that the piece most closely resembles its eponymous weather event.

Sometimes I get the sense that the music strays a little too close to expressive dramatics for my taste, tipping more towards a sort of theatrical representation (what do I feel when I encounter a snowstorm?) than a becoming-snowstorm (what becomes-snowstorm beyond all human responses?). Whenever I do, however, the little details bring me back: the totally unexpected use of a particular snatch of field recording, for example, or the wonderful static swishes near the end. This is a fine and ambitious work from Mr. Zuydervelt, who despite his immense and much-lauded discography seems intent on pushing himself forward towards ever-greater challenges; it’s also a nice introduction to the work of Kokke and Webster. 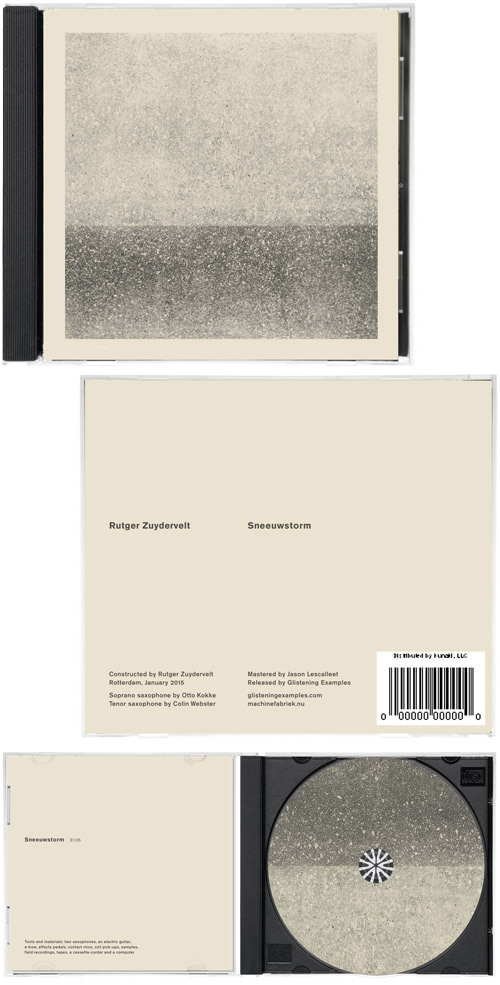