This album is the result of a day of improvising, in the midst of a tour with Will Long (Celer) and Jan & Romke Kleefstra. Without any plans we just went for it and ended up with hours of material that was later edited to the 48 minutes that is 'Gau'.

Listen to an excerpt
Pre-order the cd

In the spring of 2012 US-born, Japan-based musician Will Long, otherwise known as Celer, embarked on a short tour of The Netherlands and Germany with Dutchmen Machinefabriek and Jan and Romke Kleefstra, accompanied at times by Anne-Chris Bakker and video artist Marco Douma (my review of their concert in The Hague can be found in the Fluid archives). During this time the core ‘gang of four’ found time for a day’s recording at a studio in the Frisian town of Gau. The edited results of this session have now been released on Monotype Records, with the name CMKK referring to the quartet of Celer, Machinefabriek, and the two Kleefstras. The album presents itself as a single long-form track, and although transitions between takes are clearly audible, the sense of one cohesive and coherent work prevails.

Romke Kleefstra once rebuffed my attempt to connect the music he makes with his brother and various collaborators to the stark and relentlessly flat Frisian landscape, pointing out (quite correctly) that the makers of so-called ‘landscape music’ are often based in cities. Well, “Gau” is both less and more than a landscape record: less, in the sense that a concrete picture of a particular identifiable place never quite emerges; more, in that the album could never be reduced to something as simple or obvious as an attempt to capture the essence of a given environment. Why bring up the notion of landscape at all, then? To me it just seems to be the best framework with which to convey a sense of what listening to “Gau” is like. It comes down to a certain impassiveness, a mute yet highly charged disposition behind the rattling Jazzmaster guitar, the quiet delivery of poetry, and the rumbling, inwardly-turned synths, samples and scrapes.

By “impassive”, I mean that “Gau” does not set out to create ‘special effects’ through the mimicking of landscape feelings or emotions, an intention usually signalled by the phrase “Inspired by…”. The philosopher Immanuel Kant captured these emotions well in his notion of the sublime, in which the sovereignty of the human subject is reaffirmed by the mighty grandeur of a landscape viewed from a safe distance. No such security is present in “Gau”. Rather, the nature in which the album is immersed begins at the point when such human subjectivity starts to break down. The voice of the “I” in Jan Kleefstra’s poetry struggles to distinguish itself from the buzzing of the wind; the radio voice of a Japanese woman bounces off the psyche in the same way, and to the same extent, as a fleeting round of birdsong. In the face of surging, indifferent nature, one’s own sense of self appears paper-thin. What “Gau” induces is not the sublime thrill of transcendence, but a shudder.

Rarely has Jan Kleefstra’s voice clung so barely to presence as it does on “Gau”, a phenomenon accentuated by the evasive, amorphous colours of Celer’s ambiances (and it is well worth getting hold of the CD edition to read the English translations of the poems). Machinefabriek’s contributions are everywhere yet nowhere, quietly disappearing into the general hubbub of things; the musical maturation he demonstrated on last year’s “Secret Photographs” continues apace. And Romke Kleefstra’s guitar billows like gusts of wind through an open door, rattling the frame. Anyone doubting that this form of music isn’t capable of producing truly significant works of art need only listen closely to “Gau” to be convinced otherwise; everyone else needs to just listen.

4,5 stars out of 5 * Gau (or Gauw) is a small rural village in Friesland, Netherlands, where Will Long aka Celer and Dutch musicians Machinefabriek together with Jan and Romke Kleefstra met in spring 2012 on the occasion of a tour between Netherlands and Belgium together with Anne-Chris Bakker and video artist Marco Douma. The thunder which opens this recording could let you guess it was a rainy day and the electricity in the surrounding air, which almost compelled this quartet within a recording studio where they recorded a four hours lasting session, which became the raw material for this 47-minutes extract that Polish label Monotype consecrated on the altar of avid eardrums of its followers. The immersive listening experience CMKK (the initials of their authors) spilled out sounds like a sonic painting of the surrounding landscape where over-stretched tones, which wavers between dullness, blissful isolation and ascetic estrangement, could somehow mirror the landscape, which got "interrupted" by field recordings, grazed strings, external interferences and occasional poetic secretion by Jan Kleefstra (unfortunately I don't understand Frisian, so that they sound as shrouded in mistery to me...), who towers above gusts of winds, plastic peeps, atonal frequencies, smidgens of sub-tonal mists, distant chirping birds, padded rotors, growing dissonances, which gradually abate and deaden till the moment when the absorption of the ego by surronding space or maybe by Celer's ambient dilutions, which preponderate over other sonic inputs, seems to have been accomplished over the final lulling guitar plunks... thrill-seeking stuff! 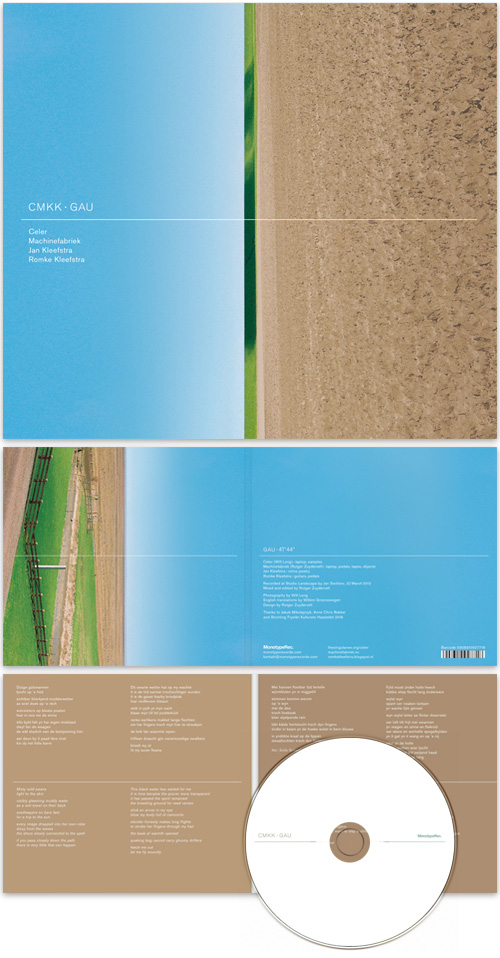