Takashi Makino has been making films since 1997. He graduated from the Cinema Department of Nihon University College of Art in 2001 before studying under the Quay Brothers in London. Since 2005, he has been involved in an ongoing collaboration with Jim O’Rourke (please see the 2010 2xDVD "Film Works Vol. 1 With Jim O'Rourke").

Rutger Zuydervelt and Takashi Makino met in 2008 at the International Film Festival Rotterdam in 2008 where Takashi's "Elements of Nothing" was nominated for the Tiger Award. They collaborated on a project called "In Your Star" where Rutger played a live soundtrack to Takashi's film of the same name. Rutger later recorded a studio version of this piece and released it as ‘Apollo’’ on his ‘Veldwerk’ album (Cold Spring Records, 2011).

In 2015, Takashi invited Rutger to score his newest film ‘Cinéma Concret’. This film is Takashi Makino's cinematic answer to Pierre Schaeffer's Musique Concrète of 1946, and Rutger was the perfect candidate to provide the soundtrack. ‘Cinéma Concret’ had its world premiere at the International Film Festival Rotterdam in 2016, where it was nominated for a Tiger Award. At the end of 2016, Takashi produced a second version of ‘Cinéma Concret’ for an installation included in his solo exhibition at Hong Kong’s Empty Gallery. According to Rutger, "The film changed quite drastically, as did its score. Instead of the full-on intensity of the original, this new version became far more fleeting and calm. Definitely more suitable of a looped video installation, but also highlighting a more subtle form of beauty in the film."

The CDR 'Concrete Scores' contains one each of the first two, both created by Takashi Makino, with whom Zuydervelt off and on works since 2008. The first piece is a film score to 'Cinema Concret', a response to Pierre Schaeffer's musique concrete, which later also evolved into an installation. I haven't seen both, so we have to take Glistening Examples word for it when they write: "Makino’s films are dense and hypnotic, similar to immersion in television static. The viewer will recognize shapes, landscapes or other images while also wondering if these things actually exist or are tricks of the mind. The films contain layers of microscopic details that can become overwhelming, especially on a theatre screen." The music works out in two different ways of which the film score is perhaps the most surprising one. In the installation version, which is at thirty minutes the longest one we hear Zuydervelt as we know him best; a master of all things very careful, with a slow development of electronic and acoustic sounds, slowly building up but always careful placing new sounds into his mix. As said the true surprise is the film score in which Zuydervelt plays something that is quite loud at one point, after starting with a few minutes of next to nothingness. It almost becomes noise in the truest sense of the word, which is something we don't hear him do a lot. This is a change of scenery that works well for him. 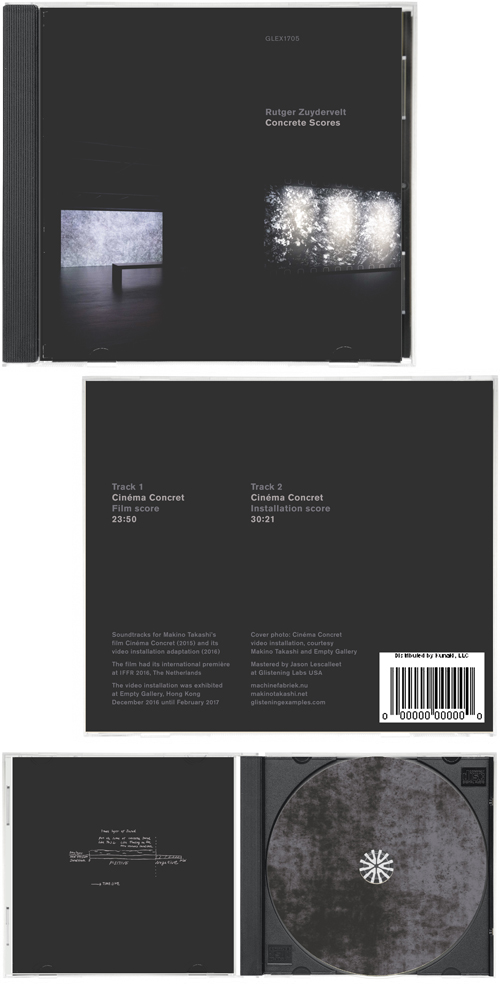