Only few Machinefabriek material has been recorded specifically for an album release but these have always been stand-outs in the vast catalogue. Both 'Marijn' on Lampse and 'Ranonkel' on Burning World Records were classic recordings, squeezing a large amount of what people love about Zuydervelt's music into one album, at the same time giving him the space to expand on new ideas. Likewise "Dauw" is one of Zuydervelt's most subtle & quiet yet refined works. Mainly built around small but gorgeous melodies of piano and guitar playing and the crackling sound of dusty vinyl samples, these songs slowly build into intensive hymn-like angel choirs of sheer heavenly beauty.

Rutger Zuydervelt, a.k.a. Machinefabriek, is a hyper-prolific artist who has had upwards of forty albums released in the last four years. Although he certainly has his partisans and champions, I've personally had a hard time figuring out what all the fuss was about. And although I don't claim to have heard every single thing he's ever done, I've heard quite a bit, and I think that with Dauw I can finally see what the big deal is. It's easily the most engaging release I've heard of his yet, as there is a much more palpable human presence at work here that I feel was perhaps somewhat lacking in the past. With over forty albums he's clearly mastered the art of sound design, as every element is perfectly paced and balanced. Whereas previously I had always felt that there was a distancing sheen going on in his work that made it difficult for me to find an "in" to, that is in no way the case here as the emotional warmth doesn't seem simply manufactured, but deeply felt. At its best, as in the title track, a very subtle combination of organic and digital sounds, combined with the spectral volume of a choir, is capable of delivering an incredibly moving investment. This could very well be his masterpiece, as he truly seems to have found a transcendence that is more than worth your time, and I must say that I do look forward to his next forty albums to see if I'm right, or hopefully proved wrong.

Dauw means dew. That is somehow a better connotation for this music than Machinefabriek which means machine factory. Machinefabriek's music is much more loose and soft. The hammering of machinery is far away.

Rutger Zuydervelt is quite a prolific Dutchman, but I haven't heard much of his music, except for a very nice concert November 2007. This release is an interesting meeting for me.

I read a lot about Zuydervelt's music and most of it is positive. So, naturally that made me curious after receiving the package. You know that feeling: something is delivered by mail and you immediately want to get a first impression. Well, my first impression is that it is quiet music. Hesitantly the first track starts moving. With soft guitar picking (slow ostinato) and an accompanying piano. Then a sustaining synth, slowly slowly. And then a bowed metal plate (delivering the same frequencies as when you hit it but with a different envelope of the sound). Then tiny microphone recordings are added (sparsely). And the melody develops a little further.

The image of the performer is that of a careful person, weighing the inclusion of a certainsound. I prefer that over those performers who include anything just to make the sound richer. Track 1 of Dauw contains just enough ingredients.
Track 2, another sample: starting with a filtered organ-like sound playing another ostinato which is slowly killed off by a droney synth. Which is subtly falling apart.

That's another constant in the music on this CD. Machinefabriek brings a very nice balance between slow melodious soundscapes and the investigation of sonic phenomena. A listener with an affection for the music of Andrew Chalk, Brian Eno, et alii gets his kicks on the moments when the music is about pitches and melody and sound beds. The other listener, with a perverse love for the dissection of sound, the build up or break down of frequencies (ala Nicolas Bernier and, in a way, Snawklor), that listener is also catered.

I could consume more of Mr. Machinefabriek's productions.

For a week or two I believed Rutger Zuydervelt was on holiday, since nothing new arrived here... well, since his excellent release with Stephen Vitiello (Vital Weekly 531 - oops five weeks of silence), but here is 'Dauw', for once (?) a CD by Machinefabriek solo and specially composed for the occasion. Various of his previous CD releases were compilations of his vast catalogue of 3"CDR releases. Here he plays acoustic, electric guitar, turntable, sampler, dictaphone, piano, tone generator and laptop. Dekorder mentions a whole bunch comparisons, from Fennesz to Arvo Part, Godspeed, Basinski, Philip Jeck and Mogwai which is funny, because it seems so right, yet it never really crossed my mind to compare him with all of these. It has the sustaining, drone like sounds of Part, Godspeed and Mogwai, and the laptop like qualities of Fennesz and the pace of Jeck. This new album, with its five tracks (the fifth spanning half the album) is another fine Machinefabriek album, in which his music crystallize further, reaching another peak of subtle sounds. Machinefabriek has founds its form already some time, and now finds time to explore things further and deepens his music. 'Dauw' is a great CD and can easily meet the best in his extended career.

I know what you're thinking, and I admit the same thoughts were rushing through my head. It's yet another Machinefabriek album - the umpteenth this year and probably his hundredth record by now, so why on earth should we stop what we're doing and pay attention? Well, maybe because 'Dauw' is probably the best thing he's done (up there with the peerless 'Marijn'), and certainly stands as his most complete body of work blending all the elements he has been chiselling to perfection over the last few years. In the past his records have largely been anthologies of disparate ideas to some degree, explorations and collaborations some of which have been hugely successful and some less so - but what we have with 'DAUW' is a truly earth-shaking artist record, an apt realisation of the Machinefabriek sound and something which will no doubt stand the test of time. Packaged in a typically beautiful fashion 'Dauw' comes with an assertion from the label that it sounds something like Arvo Part, something like Mogwai, something like Philip Jeck and something like Fennesz and for once these comparisons are pretty much spot on. Rutger Zuydervelt has married the smart post rock sensibility of Mogwai with something far more experimental and the crunchy turntablism of Jeck with something far more accessible. The resulting sound is a deeply immersive collection of experiments, populist sounds with a noisy bent, or post rock without the rock. It's harder to explain than you'd think but when you listen to the album's truly stand-out title track (probably the best piece Zuydervelt has written) you'll understand - it manages to blend the subtle grandeur and awe of Arvo Part with the space and economy of Mogwai's early material (think 'Tracy') which is no mean feat. From a series of relatively short pieces Zuydervelt ends the journey with a half-hour ambient symphony which takes the ideas of the album's first two acts and blurs them into the final third to come up with the perfect conclusion to a haunting and dare I say breathtaking journey. A truly gorgeous record that stands out as a bright beacon amongst a mire of great Machinefabriek records - if you buy one Machinefabriek album this year make sure it's this one. Huge recommendation. 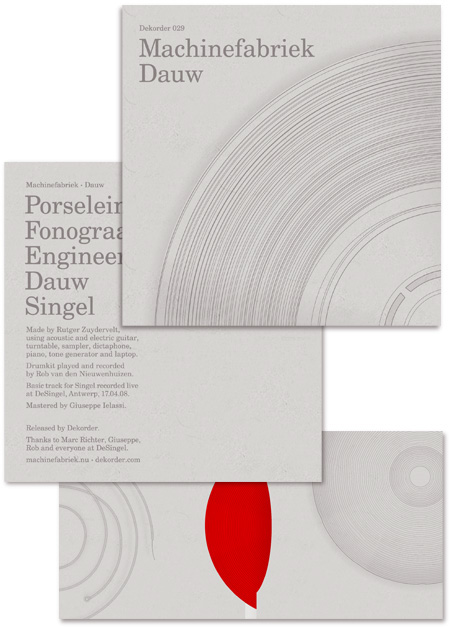