Order the album at
Bandcamp
or

Like Halfslaap (released on a 3-inch by Standard Form in 2010), Halfslaap II is a very restrained, meditative piece with a slow and subtle development that seems to play tricks with the notion of time. The hypnotic quality of Halfslaap II comes from two simple violin phrases with are almost identical, but different in length, causing them to overlap at different points each time. In the course of 35 minutes, these floating violin tones are pulling the listener into some sort of dreamstate. The violin on Halfslaap II is played by Anne Bakker, with whom Rutger worked before on the pieces Koploop (2007) and Fabriek Bakker Fabriek (2008).

Stiltetonen (album version) is a continuation of sound piece that was composed to play continuously in a small alley in Amsterdam. As part of the project Tussen-ruimte ('Between Space'), the looped, minimalistic piano melody transformed the space to an oasis of comtemplative rest in the midst of the busy city center. With it's spatious pace, the sounds of the city became an integral part of the composition. For this album version, the piano loop forms the base for a more set composition, complimented with extra layers of audio to create an equally immersive home listening experience.

Someone who has carved out his own niche is Rutger Zuydervelt, Machinefabriek. Via an endless stream of releases, one could more or less "predict" his next move. A surprising record would be him strumming acoustic guitar, singing, C&W style. Or Dixieland jazz. That's of course not the case on this new release, as true aficionados recognize the title 'Halfslaap' from an earlier 3" release by Standard Form in 2010. Here, on the second part of that piece, Zuydervelt uses the violin playing of Anne Bakker, and he uses two phrases which are overlaying each other, but sometimes also make a crossing point, like touching up each other and then drifting apart again. It takes a long time (the total length of this piece is thirty-five minutes) before we hear anything else, electronics perhaps. But slowly this piece amasses in amount of violins and sounds derived from the violin, while all along retaining that slow, majestic quality. If Arvo Pärt is a reference for maybe the first ten minutes, it might not be the case for the more crowded latter part of this piece.

'Stiltetonen' was originally an installation piece in a small alley in Amsterdam, and was a looped, minimal piano piece. In the twenty minute version here, the piece is expanded and no longer just a 'loop'. Unlike 'Halfslaap II', this piece doesn't amass anything, but stays on a very minimal level, with some heavily processed, ambient/drone like sounds leaking through, vanishing and occasionally we hear the 'real, normal' piano sounds rising out of this. Quiet tones - as the title translates - indeed. A great, yet perhaps not too surprising, album by Machinefabriek. 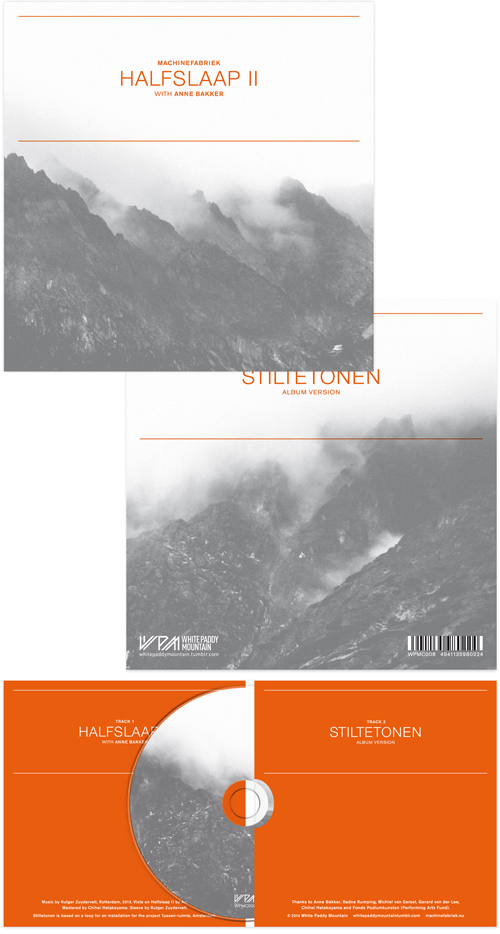