One piano-tone was the basis for this piece. Sounds a bit like Alva Noto/Ryuchi Sakamoto I guess, but rawer.
Sold out

And our friend Rutger Zuydervelt, also known, or rather, better known as Machinefabriek carries on, on end. His private CDR releases sometime read as a musical diary. On the cover of 'Piano.wav' it says: 'recorded August 3, 2007, using a found sample of a piano tone (piano.wav)'. Where this was found we are not told, but one can imagine the pleasure of Zuydervelt. Sound found. Make music. Make cover. Release ready. A slow piece is the result. The sparseness of one piano tone, added/spiced with some reverb and lots of silence, along with a slight change in pitch, makes this into a nice contemplative piece. Spacious music. Not entirely Erik Satie, more Ambarchi. Nice solitairy stuff.

It's tough to begin a review of a new super limited Machinefabriek cd-r, without discussing the fact, that this guys is dangerously prolific. This is in fact, the 12th Machinefabriek release in the last year. That's a release a month! AND that's just the ones we know about. But what can we do, they're all great! And while some of these self released little gems do get gathered up on compilations (like the recent Weleer), lots of stuff falls through the cracks and continues to exist only in these handmade micro-editions. So if you're anything like us, and we're pretty sure by now you most definitely are, then you don't want to miss out on a single shred of Machinefabriek's gorgeous and mysterious world of sound...
So here we have another 3" business card size/style cd-r (the first was the amazing Stofstuk, which for those of you who missed out, is also available on the remix 2cd Kruimeldief), a brief 5+ minute piece, created entirely using a found sample of a piano tone, hence the title, Piano.wav.

And as you might expect, this is sheer loveliness, a simple tone, pitch shifted into a virtual piano, haunting melodies drifting over landscapes of muted crackle and hiss, gorgeous ringing harmonics, lush harmonies, lots of reverb and abstract shimmer. Very forlorn and cinematic, huge smears of soft low end throb beneath a delicate landscape of spare melodic fragments and abstract arrangements, dreamy and dark and so so nice. Like most of the other short form Machinefabriek releases, this is going to be very very taxing on your cd player's repeat button. WAY recommended.

The flying Dutchman has only gone and produced yet another luscious businesscard cd (following the hugely successful 'Stofstuk') and this time he tackles that most regal of instruments, the piano. Okay so it's hardly original, these days you can hardly move for floppy haired youngsters tickling the humble ivories, or bespectacled laptop nerds (err... that'll be me then) processing piano notes through chains of digital effects, but as with everything the man touches 'Piano.wav' offers a distinctly new look at the genre. The source material for the composition (which weighs in at a brief, yet ultimately very satisfying six minutes) comes from a 'found sample of a piano tone' and it is evident from the composition that Zuydervelt has chopped, stretched and distorted the tone like digital putty to come up with something far greater than the sum of its parts. What was initially merely a single note evolves into a series of drones and a buzzing cloud of hissing, clicking sound. 'Piano.wav' could be compared favourably to the classic Taylor Deupree/Kenneth Kirschner collaboration 'Post_Piano' but within one track Zuydervelt seems to reach even further devastating levels of purity and synthesized perfection. An
absolutely essential purchase, and strictly limited copies as per ususal... 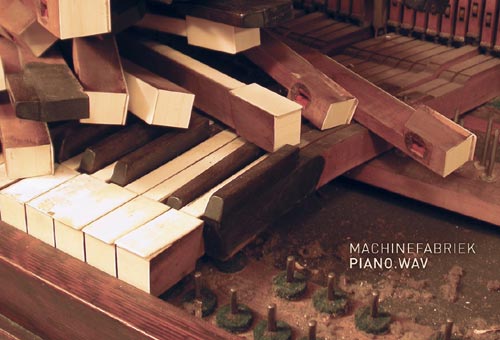