Sketches for the soundtrack of a documentary by Chris Teerink, about Sol LeWitt.

The vinyl set is sold out

Film director Chris Teerink asked me to make the soundtrack for a documentary he would be making about American artist Sol LeWitt. This was in 2009. Chris and I agreed that the music and the images should both be equally important in his film. We didn't want the score to overpower the images, but neither did we want it to become solely background 'muzak'. I searched for a certain openness in the sound, while at the same time keeping a directness to it. Musical references for me were the piano pieces of Morton Feldman (a friend of LeWitt), alva noto's collaborations with Ryuichi Sakamoto, and Enrico Wuttke's music project Flim.

I must admit that I was relatively new to LeWitt's work. Searching for more information and images, my admiration  for his art grew and grew. I found it extremely inspiring, and I became so (over) enthusiastic that within a week or two, I'd recorded more than one and a half hours of music before any footage had been shot.

These Sol Sketches can be seen as meditations on LeWitt's work. With some books of his work opened in front of me, I started improvising on  the piano. This resulted in a few hours of raw material, which were then chopped up and edited into shorter pieces. I made about 40 of 'em, from which I've selected 21 for this release.

In a somewhat hazy state I got up this morning, looked at my desk, contemplating wether I would first play some ordinary pop music and then start reviewing, or wether I should start listening to all the Vital stuff, and if so what would it be? Being a good protestant boy from The Netherlands, never loose a days work, I opted for the new, self released Machinefabriek, which comes with with an eraser! As the loud boom of night slowly evaporates from my head, Machinefabriek takes over. Thank god, I might add. Rutger Zuydervelt has been asked to compose music for a documentary on Sol Lewitt by Chris Teerink, and that choice for composing a soundtrack on a minimalist artist seems a good one. The CD doesn't contain the soundtrack but twenty-one sketches that were used in the soundtrack. The most striking thing here is the that the instrument of choice is the piano, and not the guitar, or perhaps there is guitar, but then it is very reduced. The electronic side of this album is also very sparse. The minimalism of LeWitt is excellently represented by Machinefabriek here. Minimalist piano sketches with great sparseness, lots of quiet moments, sometimes swelling and rising (the electronics treating the piano sounds perhaps) and perfectly a totally rainy sunday afternoon. Dramatic music in a great way

It's pretty hard to keep up with Machinefabriek's output. It seems that not a single month passes by without him releasing a new piece of music. So I'm pretty sure i missed a couple of his last releases. But that's not really a problem, because even if you missed out on a couple of his works, the moment you dive into this stream of releases, you are very likely to find yourself in a beautiful bath of sounds.

This time it's sketches for a soundtrack of a documentary about the american artist Sol Le Witt. While Rutger Zuyderwelt's music always has a leaning towards soundtrack-y, score like pieces, Sol Sketches explores the field even more focussed as usual. The music is even more restrained; cut to the bare minimum: Based on piano improvisations, the pieces consist of introverted piano fragments, tiny feedback sounds circling just right above the hearing threshold. There is a lot of room in this 21 pieces. Machinefabriek shows a great attention to detail and pace. With the minimalistic approach in regards to progression, these pieces have a lot in common with Satie's GymnopÃ©dies or Alva Noto's collaborations with Ryuichi Sakamoto â€“ though with a less electronic focus.

Sol Sketches might sound a little too low-key at first, but grows tremendously, as it leaves so much space for everything else that it blends perfectly into listener's room. This is way more than just a simple soundtrack.

Another month, and as you'd probably have predicted, another Machinefabriek production, albeit another Machinefabriek production whose contents are entirely unpredictable. After his most recent release(I think), the Jazz Standards 5″ vinyl with regular companion Gareth Davis, here he changes direction again, with some piano and electronics-based pieces written for a documentary by filmmaker Chris Teerink. But, here is the twist, so inspired (and typically industrious) was Machinefabriek by the chance to participate in this project, that he had written 40 tracks before the first scene had even been shot. Whittled down to 21, these range from fragments of crystalline drone that vanish before a minute is out, to more lengthier progressions that last upwards of four minutes. Given the materials used, the influence of Alva Noto and Ryuichi Sakamoto is easy to detect,with the resonance of sparse piano notes tangling up with pulsing sine waves, but it feels more spontaneous, less structured, as if some of his recent jazz improvisations have affected his working methods. As a result, these seemingly open plains have hidden depths, cut into by loose trails of quiet logic that require repeated retracing.

Under the signature of Machinefabriek, Rutger Zuydervelt has become one of the most well-known names in experimental music circles, drawing praise for his releases on labels such as Cold Spring, Kning, and Dekorder. In 2009 film director Chris Teerink invited him to create the soundtrack for a documentary Teerink was working on about Sol LeWitt, an invitation that Zuydervelt accepted, despite knowing little about the artist. After thoroughly researching LeWitt's work, Zuydervelt found himself responding with enthusiasm, and had soon produced over forty piano improvisations responding to the American artist's images. Twenty-one of these improvisations have been refined and released as 'Sol Sketches', which, although Teerink's film has yet to be completed, acts as a sort of pre-soundtrack, a work-in-progress of sorts that nonetheless stands on its own as a complete product.

The music in 'Sol Sketches' is dreamlike and evocative, which would seem to put it at odds with its purported inspiration. LeWitt, often considered as one of the key figures in the development of conceptual art, wanted his work to be rational, logical, and self-contained, to the extent that he often did not 'execute' the works himself, but instead produced sets of instructions for assistants to follow, as if the art was code to be executed by a machine. But it is precisely by this desire to efface himself' to remove himself from the site of art's production, that LeWitt inscribes himself at the very heart of that site. The mark of this inscription is the signature that accompanies every set of instructions, guaranteeing its authenticity. The signature is a trace, a ghost of desire that cannot be erased, even if the artwork takes the form of something as impersonal as a calculated series of mathematically-determined geometrical shapes.

From this perspective, it makes perfect sense that in the open, hanging notes, the insistent ostinatos, the uncertainties and hesitancies of Zuydervelt's improvisations one finds a certain hauntedness. The piano's frequent tailing off into silence, as if turning away or just leaving the room, is the musical quality most evocative of LeWitt's flight from the scene of art, sometimes it is as if the music is barely there. I found 'Sol Sketches' to be an absorbing and engaging release, standing up well as music despite its ambivalent position as a not-quite-soundtrack; although the twenty-one tracks contain little besides piano and the occasional gentle intrusion of electronics, a subtle invention and that pervasive haunted atmosphere made close and repeated listening a pleasure.

'Sol Sketches' will be released as a limited-edition 4 x 10-inch vinyl boxset on Champion Version, as well as a CD version available through Stashed Goods and also directly through Machinefabriek. The CD comes with a neat bonus 'gadget'? a custom 'Sol Sketches'-branded eraser, a reference to LeWitt's championing of drawing, and perhaps also to the artist's desire to erase all trace of himself from his art.

'Sol Sketches' collects 21 edits of longer piano improvisations by Rutger Zuydervelt for a film about American artist Sol LeWitt. The sketches were created in January 2011 for the documentary, due to be released end of summer. The piano takes centre stage for the majority of the set, embedded against subtle electro-acoustic rendering and diffusions to create a gently swirling sense of space. But, this is definitely one of Rutger's more restrained projects, and makes for a highly refined and engrossing listen. Oh, and there's a free Eraser included! 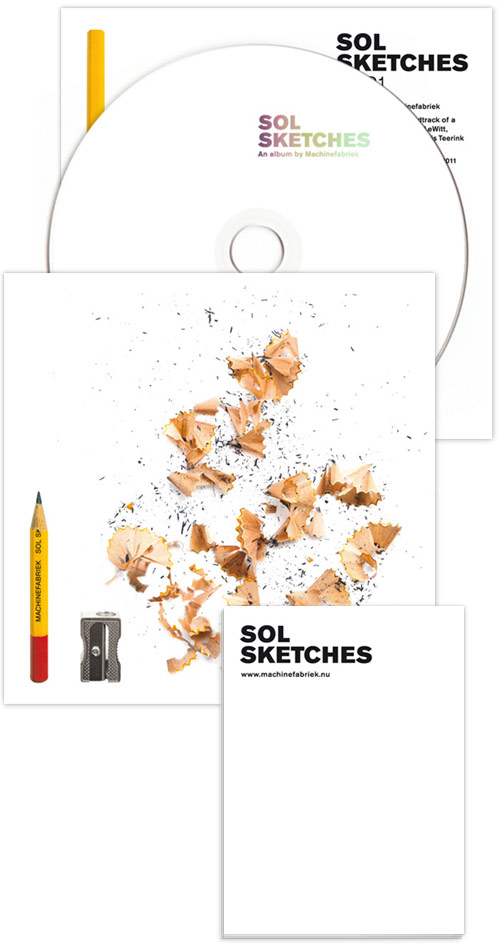