Kant A. Gareth Hardwick 'Lost in the Memory'
Kant B. Machinefabriek 'Bathyale (part 2 & 3)'

Side B - Machinefabriek is the working name of Rutger Zuydervelt, a musician and graphic designer based in Arnhem, The Netherlands. Since beginning in 2004, his prolific output, formed through a series of limited monthly self-released 3" cds, collaborations and albums has been matched only by the unfeasibly high standard of these creations.His side of the release, 'Bathyale (Parts 2&3)' is a specially re-edited version of a 2006 recording originally intended for broadcast on VPRO's Zeldzaam Dwars. Over the course of 17 minutes, we are presented with a perfect overview of the myriad of styles that Rutger crams into his musical repertoire â€“ processed hiss and static dissolve effortlessly into sublime melodic drones with bursts of controlled feedback acting as anchoring points to the composition. The result is a powerfully hypnotic yet strongly realised track that acts as the perfect compliment to both artists work.

Dutchman Rutger Zuydervelt might be a one man release machine (hah) but unfortunately his vinyl releases are very rare, in fact to this day out of fifty odd releases only three are on vinyl (this included). One side of this killer mini LP is dedicated to our man Machinefabriek and one side to newcomer and Notts resident Gareth Hardwick. I'll get stuck into the Hardwick side first since that's the A side, and indeed he does himself proud with this quite exemplary long-form drone marathon reminiscent of a low-key Stars of the Lid. I know droning beautiful music made with ebows always gets compared to Stars of the Lid, and maybe in this case Andrew Chalk would be just as valid a comparison but there really is a similar resonance to Hardwick's soft-centred waves of harmony and that's no bad thing. The fact that he's touring with them quite soon probably only adds to the fact that this comparison is pretty much bang on. However it's unsurprisingly Zuydervelt's contribution that gets us all yet again a little clammy in the palms and 'Bathyale Part 2+3' is one of his most intesresting compositions to date. Made up from edits of a live performance for Dutch radio, the track floats from gorgeous harmonic orchestral sounds into gloomy bass-heavy ambience and near silence without so much as a cough or splutter to separate the movements. After a wet and blustery middle section haunted by scraping strings and Zuydervelt's now well-known processed guitar we're drawn out by a quiet storm drawing the journey to a harrowing close. Another winner from the man better known as Machinefabriek then, how he does it we'll never know, but he does and since this vinyl issue is limited to a measly 450 copies you'd better place your grubby mitts on one now or prepare to be mightily disappointed. So, so good... 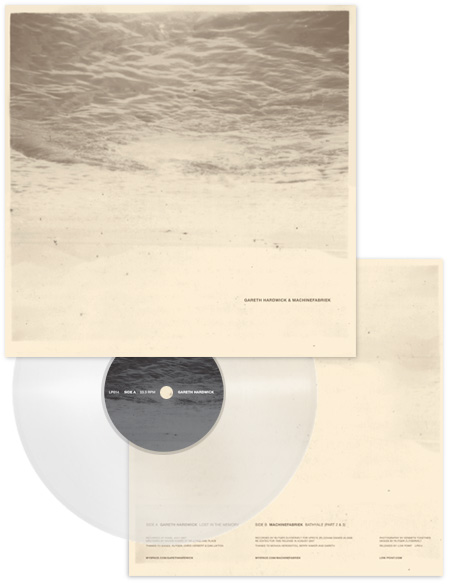